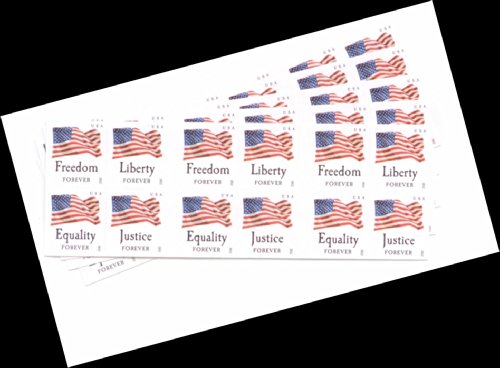 Product Description :
This is five (5) Booklets of 20 Four Flags Forever Postage Stamps (100 stamps total). These Stamps can be used for First Class Mail. The U.S. Postal Service continues its tradition of honoring the Stars and Stripes with the issuance of the Four Flags (Forever�) stamps. This quartet of stamps features a bright U.S. flag against a white background. A single word appears on each of the four stamps in large letters: Freedom, Liberty, Equality, and Justice. The black typeface recalls the look of Colonial-era printing. The current U.S. flag consists of 13 stripes and 50 stars. Congress passed legislation in 1818 stating that the number of stars on the flag should match the number of states in the Union. It also specified that new stars would be added to the flag on the July 4 after a state’s admission. The current flag’s 50th star was added on July 4, 1960, after Hawai’i became a state on August 21, 1959. The flag illustration by the late Arnold Holeywell is based on a photograph taken by art director Howard Paine. Paine also served as the typographer for the stamp. Forever stamps are always equal in value to the current First-Class Mail one-ounce rate. Made in the USA.(5) Booklets of 20 Stamps Each
Each booklet has 12 stamps on one side, 8 on the other
4 stamps designs, “Freedom”, “Liberty”, “Equality”, “Justice”