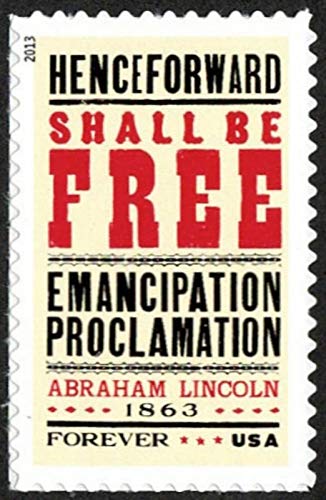 Product Description :
With this 2013 stamp this commemorates the 150th anniversary of the Emancipation Proclamation, which President Abraham Lincoln signed on Jan. 1, 1863. To commemorate this milestone, the Postal Service introduced a limited-edition Forever Stamp at The National Archives in Washington, D.C., which houses the historic document. The Emancipation Proclamation Forever Stamp represents freedom and is the first in a series of three Civil Rights stamps to be released in 2013. The remaining stamps in the series, to be issued later this year, mark enduring moments of courage and equality in the civil rights movement by featuring Rosa Parks and the March on Washington. The Emancipation Proclamation stamp is the latest stamp to be issued by the Postal Service in tribute to civil rights events or leaders. In 2009, the organization released stamps featuring 12 civil rights pioneers including Mary Church Terrell and Mary White Ovington, and every year it commemorates notable leaders and cultural milestones through other stamp collections such as the Black Heritage series and the American Treasures series. Emancipation Proclamation Stamp Design Renowned graphic designer Gail Anderson partnered with art director Antonio Alcalá to design the stamp. It prominently features the phrase, “Henceforward Shall Be Free,” which is taken from the historic document. It also notes Abraham Lincoln’s name and the year the Emancipation Proclamation was signed. Anderson, known for her term as senior art director at Rolling Stone magazine and design of Broadway play posters, revels in making typography from old forms. To evoke the look of posters from the Civil War era, she tapped Hatch Show Print of Nashville, TN, to produce the Emancipation Proclamation stamp. Established in 1879, Hatch is one of the oldest working letterpress print shops in America and employs the motto, “preservation through production.”Never been hinged
Freedom – Emancipation Proclamation Single Forever Stamp Scott 4721